Who doesn’t love to cozy up on the sofa with a good picture book?

And this chilly winter season makes a cozy reading moment even more precious.

So grab your hot cocoa, some fuzzy blankets, and your babies because I’ve got a list of 100 winter-themed picture books for you to read. 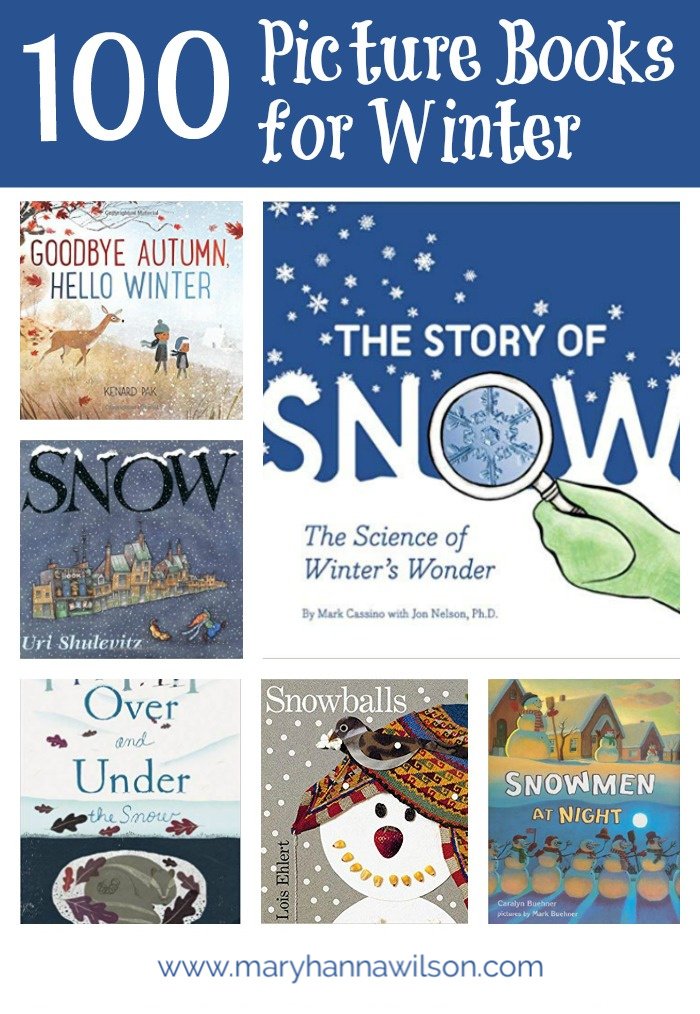 A Poem for Peter: The Story of Ezra Jack Keats and the Creation of The Snowy Day by Andrea Davis Pinkney
Winter Bees by Joyce Sidman
Winter: An Alphabet Acrostic by Steven Schnur
Winter Eyes by Douglas Florian. poetry
Stopping by Woods on a Snowy Evening by Robert Frost
Iguanas in the Snow: And Other Winter Poems by Francisco X. Alarcon
It’s Snowing! It’s Snowing!: Winter Poems (I can read level 3) by Jack Prelutsky
Snow. Snow: Winter Poems for Children by Jane Yolen
Winter Poems selected by Barbara Rogasky

Animals in Winter by Henrietta Bancroft
Owl Moon by Jane Yolen
Over and Under the Snow by Kate Messner
When It Starts to Snow by Phillis Gershator
Stranger in the Woods by Carl R. Sams
Time to Sleep by Denise Fleming
Hibernation Station by Michelle Meadows
The Snowy Nap by Jan Brett
Robin’s Winter Song by Suzanne Barton
When Winter Comes by Pearl Neuman

Winter Wonderland by Jill Esbaum
The Story of Snow: The Science of Winter’s Wonder by Mark Cassino
Curious about Snow by Gina Shaw
Snowflake Bentley by Jacqueline Briggs Martin
The Secret Life of a Snowflake: An Up-Close Look at the Art and Science of Snowflakes by Kenneth Libbrecht
Snowflake: Winter’s Frozen Artistry by Kenneth Libbrecht and Rachel Wing
Migration by Robin Nelson
Winter (First Step Non-Fiction) by Tanya Thayer
Snow is Falling (Let’s Read and Find Out Science) by Dr. Franklyn M. Branley
It’s Snowing by Gail Gibbons

Night Tree by Eve Bunting.
The Little Fir Tree by Margaret Wise Brown.
The Christmas Miracle of Jonathan Toomey by Susan Wojciechowski.
Christmas Day in the Morning by Pearl S. Buck.
Christmas Farm by Mary Lyn Ray.
Bear Stays Up for Christmas by Karma Wilson.
The Year of the Perfect Christmas Tree: An Appalachian Story by Gloria Houston.
How the Grinch Stole Christmas by Dr. Suess
Red and Lulu by Matt Tavares.
The Twelve Days of Christmas by Alison Jay.
The Little Reindeer by Nicola Killen.
Pick a Pine Tree by Patricia Toht.
Arctic Christmas: A Very Cool Pop-Up Book by Janet Lawler

Flannel Kisses by Linda Crotta Brennan
Three Snow Bears by Jan Brett.
The Story of the Snow Children by Sibylle von Olfers.
Snow Party by Harriet Ziefert
The Mitten by Jan Brett
Goodbye Autumn, Hello Winter by Kenard Pak
Secrets of Winter: A Shine a Light Book by Carron Brown
Walking in a Winter Wonderland by Richard B. Smith
Blizzard by John Rocco.
The Nutcracker by Susan Jeffers.

Red Sled by Lita Judge
Winter by Gerda Muller
The Snowman by Raymond Briggs
Wolf in the Snow by Matthew Cordell
Flora and the Penguin by Molly Idle
Snowman’s Story by Will Hillenbrand
The Snow Rabbit by Camille Garoche.