Our surprise plans were formulated and the days leading up to our trip were finally here.

My sister arrived in Raleigh on Wednesday afternoon.  We had a whirlwind time in Raleigh which included a trip to my favorite fried chicken, Beasley’s Chicken and Honey.  Then we packed up and prepared for our trip. 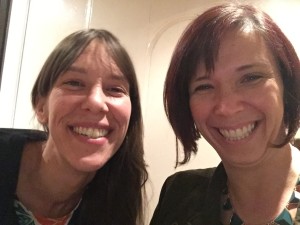 Early Thursday morning we set off for Florida.  My sister, the four kids, and I all piled into the van, anticipating the day ahead.  All of our necessary food was packed in the van so that 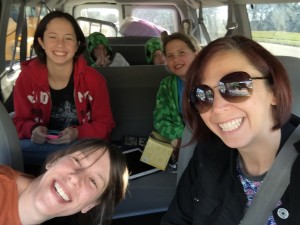 stopping would be minimal and we would arrive before 5 PM.

My parents weren’t expecting me until Friday, and they had no idea that my sister was with me.  We couldn’t wait to surprise them.

Everything was going smoothly until it wasn’t anymore.  Bam!  Now 45 minutes from my parents, a very strange wrench shaped light appeared in my warning lights.  My car would no longer accelerate.  At the VERY SAME instant, we hit a huge traffic jam so everyone was slowing down to a stop and I was able to safely pull over, even on the left hand shoulder.

I restarted the car, secretly hoping that is all it would take.  Fail.  The wrench light persisted as did the complete failure of the gas pedal.  The car would move, but very slowly.  The only movement forward was the slow creep forward that happens automatically when you put your car into drive.  (I now know that this is called “limp mode” and it happens in a vehicle to prevent the driver from driving it and causing further damage)

The only good news was that the traffic was creeping forward bit by bit, so I fit right in with their speed.  We merged back onto the highway and made it safely to the right hand lane and continued to drift along the road.

Occasionally, the traffic would begin to speed up over the 10 mile an hour speed of my vehicle and I would pull over to the shoulder to drift, as not to hold up the traffic.  The irony was that drivers would honk at me AS THEY PASSED because they thought I was trying to side step and create a new lane.  One lady rolled down her window to tell me the police were coming to stop me.  I tried to yell that I had car trouble, but she was speeding by me too quickly.  I had to explain her poor behavior to the kids, who were already freaking out just a touch.  The woman clearly failed to recognize my emergency lights and my very slow pace. I wasn’t pulling anything.

In the end, we “drifted” slowly to the next exit and pulled in at a mechanic.  His computer was broken so he suggested a place down the road.  We headed down the road, but quickly realized that rush hour traffic in Ormond Beach, Florida was not going to be safe at 5-7 miles per hour without acceleration.  Simply turning out into traffic was dangerous because I could not accelerate.

We pulled the van into the next gas station and called AAA to arrange a tow to a nearby mechanic with great reviews online.

Our next call was to my parents.

“Hey Dad!  Uh.  I have a surprise for you.  We left a day early and the van broke down and we are thirty minutes from your house!  Surprise!”

He was on his way home from the gym, which is in walking distance, and said he would be there soon.  My mother would come as well so she could take the kids home while I followed the tow truck with my father.

So we did what anyone does.  We emptied the van of everything we needed and we bought food at the gas station and we danced.  And we periscoped. 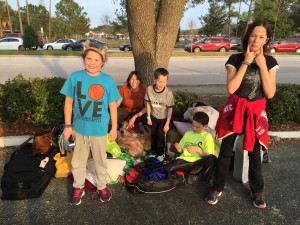 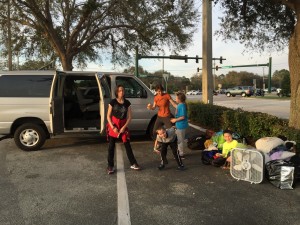 Even though our plans to surprise them in their yard were ruined, we still had the surprise of my sister, so excitement was in the air.  Mom was the first to arrive.  We hid Virginia, my sister, in the van and she jumped out after we said our hellos.  My mom was very surprised.  We talked and laughed for a bit until the kids wanted to go in the restrooms, so Virginia took them in.

My father arrived while they were in the gas station.  We were chatting about the plan while the kids ran over to see him.  My sister waited until his back was to her and then she appeared and shocked him completely.  I wish I had a picture of the dumbfounded look on his face.  Utter confusion.

After some laughter and explanations, we formed a plan and my mom left with Virginia and my younger three kids.  Dad, Kayleigh and I followed the tow truck to the mechanic.  Poor “little” van on that big tow truck:

Unfortunately, the van didn’t end up being an easy or inexpensive fix.  The heat shield protecting my wire board failed and the mechanism holding all of the wiring for my vehicle was melting.  They were failing wire by wire and sending all sorts of false codes to the computer.  I am grateful this was discovered as it explains the “check engine light” that has been on for the last 2 years.  We have been dealing with all sorts of codes that didn’t make any sense.  This explains all of that.

In the end, our trip was extended by four days, creating up to a 10 trip!  We had planned to leave on Tuesday, but remained in Florida while the van was repaired until Saturday.  My sister flew home to Michigan on Friday as planned, having lost the 3 days alone with my parents.

But we made the best of all of it and had a great time visiting sites in Florida.

The craziest part, as if there weren’t enough already, is that my husband had a business meeting in Tampa on the day before I was going to drive home.  He bought a one-way flight, attended his meeting, made the 2 hour drive to my parents house to return his rental car there, and then drove home with the kids and I.  It was so nice that I didn’t have to drive home alone.

All in all, we had a fabulous adventure that was birthed from a crazy misadventure.  And we did, in fact, surprise my parents.