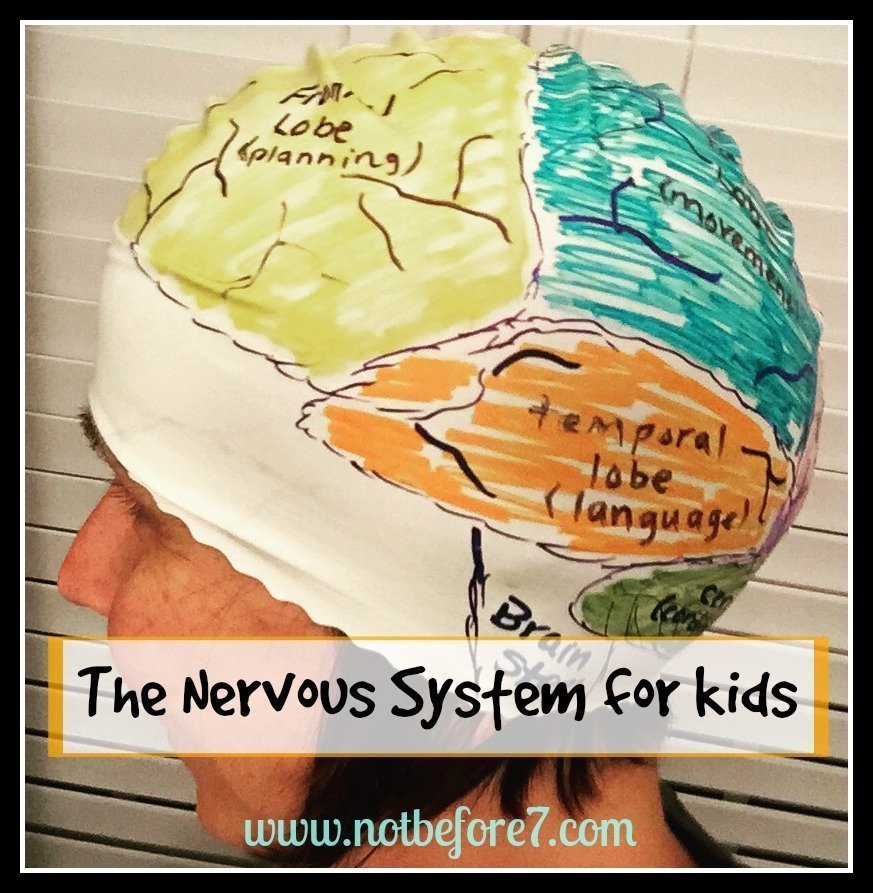 Today, we got together and reviewed the basics of chapter 9 (The Nervous System) and most of chapter 10 (The Nervous System Extended).  My goals were to review the big picture topics and to make the learning fun and memorable.  To kick off our meeting time, they were all given a squishy pink brain that my friend, Jessica, found on clearance after Halloween.

Well planned, Jessica!  They loved squishing the brain during our talk! 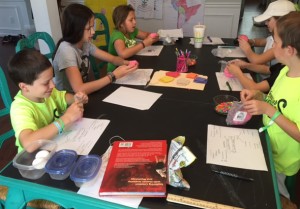 We started by filling in notes that I had created based on the information in the chapters.  The students range in age from 6 to 13 so the note sheet had a few very basic blanks just to keep them engaged. 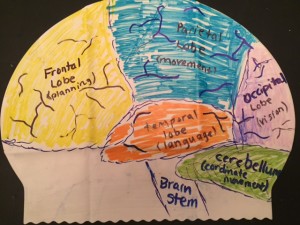 Then it was time to talk about the brain.  Using a white swim cap, I created a diagram of the brain inspired by this site.

It was fairly easy to do the night before while the swim cap was flat on the table. Sharpie markers worked to color on the swim cap, but the material dried them out quickly.

I am pretty sure all of the markers that I used are now destroyed.  But it was well worth it in the end as I wore it when I introduced information about the brain.  It was a fun way to hold the attention of the students while we discussed the function of the lobes of their brains. 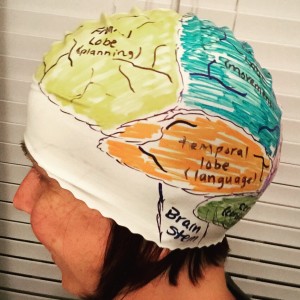 After filling in our notes, we played a few brain games.  The first one involved tricking our brain.  The students crossed their arms and with their palms interlocked, they twisted their arms toward their bodies and upward.  (see picture)  While they had their hands in this position, their partner pointed to a finger, without touching it, for them to wiggle.  The confused brain had a little difficulty with it.

Next, we played a game with our visual memory.  The students were in pairs seated across from one another.  In front of them were cut squares in five colors.  The first student selected 5 colors and arranged them in a line hidden from the view of their partner using a folder.  The squares were revealed for three seconds while their partner tried to memorize the pattern.  Then the pattern was hidden again while the partner tried to recreate it in front of them.  The kids had a great time with this game and discussing visual memory.  Afterward, we repeated it with 6 colors and we would have tried more if there weren’t more fun games to try. 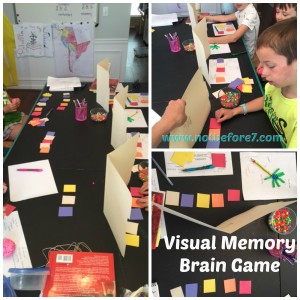 Next, we played with our reaction time using rulers.  One student held the ruler while the other held open hands, ready to grab it when it was dropped.  We measured their reaction time in centimeters based on where they caught the ruler. 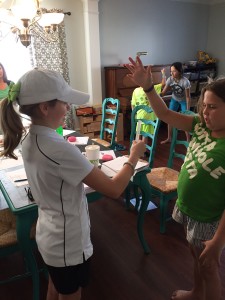 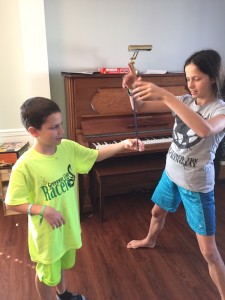 It was time to talk about the protective cerebrospinal fluid.  And activity in the guide suggested demonstrating the effectiveness of the fluid using egg yolks as the brain.  I cracked two eggs, one in each container.  “This is your brain,” I began after cracking the first egg.  And it was for this experiment, but none of the kids picked up on the reference to the anti-drug campaign from my childhood.  But I digress.

One container was sealed with just the egg.  The other container was filled to the brim with water and then sealed.  The water represented the cerebrospinal fluid.  Two volunteers held the containers high above their heads and then released them to the floor. 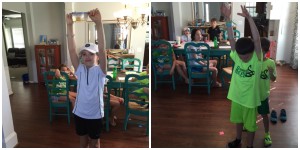 The unprotected brain (egg yolk with no water) was now ready to be scrambled.  The yolk was completely destroyed.  On the other hand, the protected brain (egg yolk with water) was completely intact, surrounded by cerebrospinal fluid (water).  I was a bit nervous that this one wouldn’t work, but it did!  I am going to let the kids drop the containers from a higher height tomorrow and test the results. 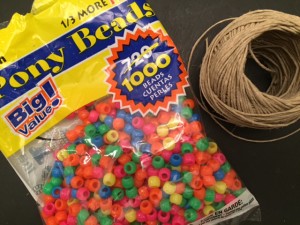 The goal was to create a model neuron to take home: 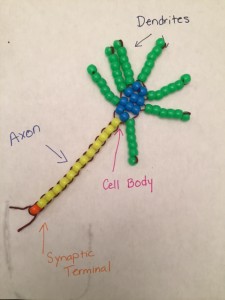 Thankfully, I attempted this task the night before, so I now understood how to follow the very vague diagram instructions. I found this activity on Pinterest and the diagram can be found on this page as the second activity.

We had a great time and learned a ton.  What I love about days like this is that memorable games and activities help act as the glue to seal in some of the learning.  I know my kids won’t remember every part of their notes, but they will remember the fun we had and aspects of our learning because of our games.

“Hey, remember that time we dropped the eggs…”

2 thoughts on “Studying the Nervous System with Kids”